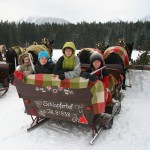 There is one thing you need to remember when planning a white Christmas in Europe: Christmas shopping should not be left to the last minute. Christmas Eve is the time for feasting and celebrations, not late night shopping. My footsteps echoed on the eerily quiet streets as I searched in vain for an open shop door. A promising shaft of light only revealed the omnipresent Turkish kebab shop. I didn’t think they could sell me wrapping paper.

We had been in Salzburg for five days which should have given me plenty of time for shopping. However, what with touring the salt mines, exploring the mist enshrouded fortress, strolling aimlessly along picturesque, cobble-stoned streets, battling jetlag through a Mozart dinner concert and partaking in the obligatory, but regrettable, “Sound of Music” tour; time had slipped away.

I cursed myself for not bringing presents from home but after organising gifts for teachers, tutors, coaches, team managers and babysitters; I seemed to have run out of time, and energy, for my own family.

The only present hurriedly chosen in the markets was a ceramic Austrian house our eldest had admired. Within minutes of purchase, however, the bag was put down on one of the aforementioned picturesque, cobble-stoned streets and we heard it break into multiple pieces.

Although we constantly reminded the children of how lucky they were to be on this holiday, there is no avoiding the fact that, in a child’s eye, when it comes to Christmas, presents are the main event. We had a splendid tree decorated with ornaments from the Christmas markets. It was just that, apart from the pottery house, super-glued together and wrapped in toilet paper, there was very little to go under it.

As a result the atmosphere on Christmas morning was somewhat subdued and present opening was a brief affair to say the least. Thinking it was best not to let the children dwell on their disappointment, we turned to breakfast and feasted on a variety of krapfen, giant Austrian doughnuts oozing jam, cream and chocolate. We then went on a sleigh ride through pine forests to a traditional inn (which very much resembled the broken Christmas present) where we warmed up with gluhwein and hot chocolate and ate turkey snitzel. The children had a snow ball fight in thigh deep, powdery snow and sucked on foot long icicles snapped from the roof. For dinner we were surrounded by stag horns at the 600 year old Restaurant Goldener Hirsch. Our six year old bypassed the traditional Christmas Day goose and ordered sausages followed by ice cream with chocolate sauce. She had never enjoyed a Christmas dinner more!

Our attentive waiter asked the children if Christmas had brought all the presents they had hoped for. There was an awkward silence before he added, “But coming to Austria is the best Christmas present, no? You could not wish for more than that?”

Everyone smiled contentedly in response. Our waiter had just earned himself an extra-large tip.