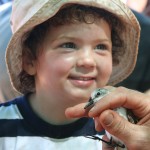 We crouched in the bunker of the sand dunes. All was silent, apart from our nervous breathing, as we waited for the signal. This was our first time, unlike the others. We didn’t know what to expect. All we knew was that we had to act quickly. If we didn’t it could mean the difference between life and death. We were anxious and confused. What if we were too slow? What if we did it all wrong? What, in fact, were we doing here?

Our family was on a camping expedition around Australia and had called in to the Broome Bird Observatory to join a bird watching tour. Unfortunately all tours were full but it was suggested we could help out with the cannon netting instead. We had no idea what this was but thought we would go and have a look, just for half an hour, before continuing our journey.

We had timidly joined a group of scientists and local volunteers who, in the manner of one passionate about one’s subject, incorrectly attributed us with assumed knowledge of the day’s happenings. Apparently it had something to do with research into migratory shorebirds and, from what we could work out, a large net was to be fired from a cannon (hence the term “cannon netting”) over a flock of birds roosting at the water’s edge. We had been told to wait out of sight but to rush in as soon as we heard the cannon.

Feeling none the wiser, I was about to suggest we backed out when there it was: BANG! The kids leapt up, putting into practice all that nippers training, and hit the sand running. There was nothing for it but to follow them.

Down on the beach it was pandemonium. People were running in all different directions. Trapped wings were flapping. Instructions were being shouted. Everyone seemed to know what to do. Except us.

We tentatively gathered around the net and immediately had feathery bundles thrust into our hands with commands such as “Red-necked stint!”, “Bar-tailed godwit!” and “Ruddy turnstone!” barked at us. We carefully carried our birds up the beach to the sorting cages before running back for more.

Before long I became over-confident and was taking up one bird in each hand, only to forget what I had in either of them and would have to return for re-identification.

Once all the birds were sorted we were then put into groups ourselves. Our team was in charge of red-necked stints and Jan, our team leader, was a no-nonsense type who quickly had us working like a well-oiled machine. Peter, the twitcher of the family, fetched the birds from their cages; Jan inspected them while dictating details to me, the scribe. My husband glued on numbered leg bands and Edward, then seven, was the release man. His job was to take the bird down to the water’s edge and check the skies for raptors before letting go. He was very diligent in his role.

Meanwhile our daughters were part of the sandpiper’s team. Their group was taking blood samples which would be sent to Holland for DNA testing.

I was amazed by the attention to detail and the amount of information to be gained from these tiny birds. By checking each bird’s size, weight and plumage, Jan was able to tell its age, sex and breeding location. Our envisioned half hour quickly turned into half a day as we became caught up in the fascinating lives of plovers, knots and sandpipers. The flocks of unidentified birds previously glanced over on the beach were now individuals with their own personal story to tell.

Lucy, aged only three at the time, held a tiny red knot in her cupped hands, and listened to the story of its life so far; how it had flown non-stop from its breeding grounds in Siberia, over 8000kms across the sea and would now fly on to China and Korea. The tracking device her dad had helped fit on its leg would continue to tell its story and we could follow its progress on the Observatory website.

Proudly and carefully she carried the bird down to the water’s edge and we all watched as she released it into the skies to continue its journey. Like witnessing a car crash, we kept watching as a Brahminy Kite swooped down, caught it in its claws and proceeded to pluck and disembowel it.

Thinking she would be traumatised, I rushed to Lucy’s side but she merely brushed me off with a “that’s life” shrug and ran back up to the cages for another bird.

Unlike Lucy’s red knot, we did continue our journey that day. And at campgrounds all along the coast of Western Australia, we talked of migratory shorebirds in the manner of one passionate about one’s subject.