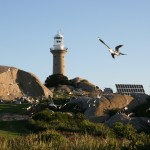 I realise it is time to come clean, both to Boyd and the kids. “They actually didn’t know they were going to be doing this.” I admit.

My friend Jane and I had booked our families into the three day Montague Island Naturewise Conservation Program run by the NSW National Parks and Wildlife Service and while we had talked a lot about seals and penguins, about lighthouses and whale watching, we had thought it was better to stay quiet about the ‘regeneration’ part of the program.

Eight kilometers offshore from Narooma on the NSW South Coast, Montague Island is in the path of the food rich 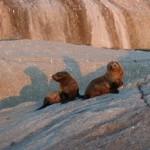 waters of the East Australian current and, with no snakes or predatory mammals, the island is a natural haven for migratory seabirds, fur seals and the biggest colony of Little Penguins in NSW. It also has the dubious claim to fame of hosting just about every species of weed in Australia.

Although great progress has been made in weed eradication since NPWS took over the management of the island in 1987, much work remains and Jane and I have kindly volunteered our children to help out.

As 15 year-old Harry looks down at the gloves and trowel in his hands, it suddenly dawns on him what ‘regeneration’ actually means.

“Gardening?” he exclaims, “I hate gardening!”

It is not long however before Boyd’s passion for the project, grown from 24 years involvement, rubs off on us all and we get down and dirty. The weeds pull out easily and are replaced with tube stock of Lomandra, a hardy grass which doubles as an excellent penguin nesting site. After a short time, we stand back and admire our small transformed patch with satisfaction.

Ian Andreassen, another resident field officer, comes to inspect our handiwork and take us to our next activity. He admires our impressive mound of uprooted Kikuya grass and explains how this invasive grass, originally introduced to control erosion, now grows rampantly, choking penguin burrows and over running native species. It is currently National Park’s main target for eradication.

Ian is a relative newcomer to the project, having been transferred here from Outback Queensland for a two year contract, but is clearly just as passionate about the island. He claims he and his wife are “living the dream”. As if to clarify this he pauses on the track to allow us to appreciate the view. We follow his gaze over orange lichen covered boulders, the stark white light house and the sparkling turquoise seas.

“All we need now is a whale,” I note flippantly.

With that a humpback breaches high out of the water, right in our line of vision.

Ian turns back to us with a wry smile: “That’s one I prepared earlier.” 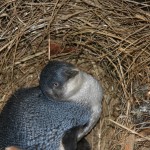 We head past the lighthouse toward the jetty in search of penguin nests with Ian educating us all the way on the habits and lifestyle of the Little Penguin, otherwise known as the Blue or Fairy Penguin. He has to shout to be heard above the cries of the crested terns and silver gulls nesting along the track. Unlike their city beach cousins, the gulls are clean and handsome and their bright red beaks and legs signal they are mid breeding cycle. They scream at us as we walk past, protecting their new families.

We come to an enclave of numbered boxes, built by National Parks to facilitate penguin monitoring. Handing out 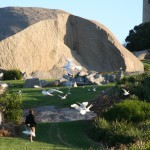 maps, record sheets and identification charts, Ian instructs us on our next task. We need to check each box for inhabitants, record the number of eggs or chicks plus make any general observations.

We start slowly and diligently, crowding around each box, debating the age of the chicks and making detailed notes about the adults such as “appeared cranky” or “looked anxious”.

“I don’t think you need to go through the emotional state of each bird,” comments Ian dryly, looking at his watch.

We speed up the process and by Box 15 are experts, discarding the guide sheets and quickly identifying the age and health of each chick. It is not long before we have two sheets filled and Ian announces we have earned a break.

We return to our island home, the former Assistant Lighthouse Keeper’s cottage for a cup of tea. Together with the 5 bedroom Head-Lighthouse Keeper’s house next door, our 3 bedroom residence has been faithfully restored by the National Trust and made available as guest accommodation. Used to camping, the kids are overwhelmed by our spacious, beautifully appointed house and Jane and I especially enjoy the luxury of having all food provided.

We take our tea to the front verandah for some whale watching. Our cane chairs creak as we lean back and sigh contentedly. The wide ocean views framed by the blue-trimmed whitewashed walls of the surrounding buildings make us feel like we are on a Greek island rather than just off the NSW South Coast.

Cass Bendixson, NPWS Tour coordinator for Montague Island, joins us and fills us in on some of the Island’s history, particularly that of the lighthouse which towers alluringly over our courtyard. There is something about lighthouses. They are not only beautiful pieces of architecture in spectacular and often remote settings but they are also so evocative of the isolated lifestyles of the keepers and their families.

This lighthouse was built in 1881 with a base sculpted from hand cut local granite, so hard it shows no signs of weathering, and was topped with a do-it-yourself kit shipped from England. Cass tells us how all the parts arrived like an Ikea wardrobe. “The only difference being…it worked,” says Cass.

We finish our tea and follow Cass for a tour inside. Standing on the precarious balcony the wind is cold and blustery, even on this calm day, and we easily imagine the harsh and challenging living conditions of the lighthouse keepers. Before 1939, when the first radio transceiver was installed, the only communication with the mainland was by signal flags. Cass tells us of one story of when the keeper’s 8 year old son was ill with appendicitis but the seas were too rough for a boat to land. In desperation, the boy’s father threw his son from the rocks into the boat. It would be five days before the family saw the “all’s well” signal from the mainland.

We are also told of the tragic story when, in the 1950’s a sudden storm took the lives of the entire local Aboriginal adult population who were paddling out to the island for food gathering and ceremony. Despite this terrible history, Montague Island remains an important ceremonial site to the local Yuin people and parts of the island are sacred and off limits to visitors.

Apart from these few areas and the northern hump of the island, protected as a nature conservation area, we are free to roam and explore what has already become ‘our island’. We wander the graveyard, disturb the gulls into flight and watch the penguins at dusk as they waddle back to their hungry partners. We even spend an afternoon snorkeling with the seals, the Antarctic temperature of the water momentarily forgotten as the kids are encircled by seal pups, darting and swooping around them, enticing them to play.

We resent the day-trippers and feel superior when they file back onto the boat to return to the mainland. We have only been on the island for two days but already I feel very possessive. I mention this to Ian and he agrees ardently. “That’s the ‘Islanditus’.” He states. “You get real protective.”

On our final morning we are evacuated early due to a severe storm warning. We dally hoping to be marooned, but sadly make it just in time before the Southerly hits. My eight year old states she wants to return to Montague Island, every year, for a whole week. The other kids are keen on her plan. 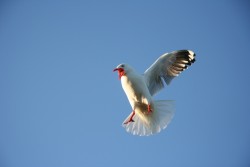 “Even if you have to do gardening?” I ask.

“Definitely!” they reply, frowning. They are surprised that I even need to ask.

National Parks offer a range of tours which include boat transport from Narooma to Montague Island. See www.narooma.org.au

STAYING THERE: The two keepers’ houses (sleeping 8 and 12) can be rented for self-catering stays, from $3600 per house for 2 nights. Montague Island 3 Day Naturewise Conservation Program: from $595 per adult and $300 per child (aged 7-13). Price includes 2 night’s accommodation, linen, return boat transfers from Narooma, all meals while on the island, National Parks guide, evening penguin and wildlife viewing, Island & lighthouse tour, penguin monitoring. www.conservationvolunteers.com.au.

SNORKELING THERE: Snorkeling with seals from $60 per adult. See www.charterfishnarooma.com

WHEN TO GO: Sept – Jan is best for viewing sea birds, seals and nesting penguins. Sep to Nov is peak whale watching season.