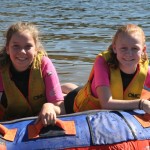 That’s the problem with camping with country people. You can’t complain about the rain.

We have been invited by Our Country Friends, Phil and Helen, to Wyangala Dam, 48 kms upstream from Cowra on the Lachlan River, to join them and about 10 other local families for a weekend of camping and water skiing. Although we have camped before, and skied on snow before, we have never water skied before. We are about to discover a whole new world.

Every sport and hobby has its routines and rituals and water skiing, we are about to learn, is no exception.

We find our host Phil, complete in Driz-a-bone, Akubra and stubby holder in hand, staking out what is, we all later agree, the best site in the park. Phil has done two trips here already: once to drop off the boat and again to bring a trailer load of wood. There is no mucking about with bags of petrol station kindling. Despite the rain, a huge blaze is soon roaring. With Phil, there was never a question of not having a fire.

More families start arriving and I struggle to remember everyone’s names. Not only is it difficult to make out faces in the dark, it doesn’t help that people initially introduced as Geoff, Duncan and Jeremy, are thereafter referred to as “Westy”, “Booty” and “Butch”. I give up for tonight, slip into my thermal underwear and curl up between hot water bottle and husband in the damp, dripping tent. 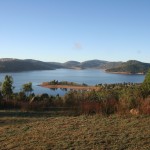 The good thing about setting up in the dark, in the wind and the rain is that when you wake up to a beautiful, still, clear morning, you appreciate it all the more. Clearly that country optimism is rubbing off. Wolfing down bacon and eggs, we look out over the vast expanse of the dam and its surrounding hills. We can just make out the rabble camping cheek by jowl at the waters’ edge below. We congratulate Phil again on his great choice of site.

As if multiplying overnight, more and more children appear from surrounding tents and, foregoing any introductions, a game of soccer starts up. The fire is still going and the billy is boiled. And then boiled again. And again. After the fifth cup of tea, it is time to make a move.

Utes are loaded up with folding chairs, shade shelters and eskies, Bags are filled with wetsuits, towels and lifejackets. On top of that goes the equipment: skis of varying lengths, ‘donuts’, ‘biscuits’, ropes, pumps, learner bars, knee boards, wake boards. There are learner skis joined at the tips and learner boards joined at the base. It seems anything that floats and can be towed is here.

Ceremoniously the cover of the boat is peeled back to reveal something out of a James Bond movie. A convoy of Land Cruisers and Hilux Utes then wait their turn on the beach to expertly back trailers into the water. Boat owners silently assess each other’s craft from under their hat brims. Each vessel appears bigger, faster, more expensive looking than the last. There seems no end to the range of fishing and skiing attachments they are equipped with. The men stand and mutter comments under their breath. Boat envy is evident.

Utes are now unloaded and gazebos are set up on the sand. The car delegated to fetch ice from the servo returns and a batch of GI cordial is mixed up in the 15 litre cooler. Bags of Dorritos and boxes of Shapes of every flavour are on hand for morning tea. The kids are in heaven.

At the helm of “Rite Stuff” Phil has morphed from Daniel Boone to Sean Connery and patiently, and constantly, tows and retrieves groups of children around the dam. Helen, a teacher, can’t help herself but give constant positive reinforcement. Together they make a great team.

As the children are delivered, exhilarated, back to shore, they excitedly report varying levels of achievements. Wrapped in towels they stand shivering and while shoveling handfuls of Shapes into their mouths they compare notes on how many times it took them to stand up and for how long. Stacks, face plants and wipeouts are given scores out of 10. The bravado and exaggerations are clearly the same in all sports. 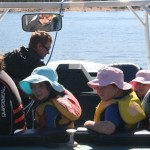 As the sun begins to set, we return to camp and Phil once again gets the fire blazing. Camp ovens are filled with sides of beef, a butterflied lamb sizzles on the barbeque and a whole chicken turns on the rotisserie. There is no pretense of adhering to the dietary rituals of Good Friday here. We know the routine now and we know we need the energy to get up and do it all again tomorrow.

We need the sustenance for that other Easter ritual: that of water skiing on Wyangala Dam.