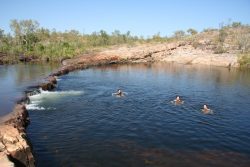 Cascading waterfalls bubble over whirling spa pools which spill into an infinity-edged rock pool.  Pink lilies gather at the rim where a water dragon basks in the sun.  The pool is deep and cool with fresh, sparkling water. And we have it all to ourselves.

We have arrived at Biddlecombe Cascades, the first campsite on our five day walk along the Jatbula Trail in Northern Territory’s Nitmiluk National Park, and it feels so good to be here.  Although it is only lunch time and we are only 10 kilometres north of our starting point at Katherine Gorge, already everyday routines and the trappings of civilisation feel a long way away.

I watch my four children splash and dive exuberantly.  While I take a moment to soak in the scenery, they have wasted no time jumping in.  Kids can’t ever just swim. They slide down the cascades, leap from rock ledges 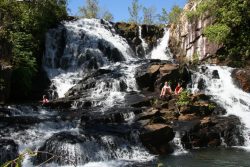 , ride the current and shower under the pelting water.

“Be careful of the undertow!” I call out, futilely.  They don’t stay above the water long enough to hear me. A bare bottom appears bobbing in the bubbles.  Apparently the force of the waterfall is strong enough to undress you.

I am so relieved to see them having such a good time. When I had originally made the suggestion that we go on a 60km walk over five days in 35 degree heat, carrying all our food and equipment, our children weren’t exactly bursting with enthusiasm.  In our household, as is common in many families, “walk” is a four letter word and seems to invoke instant lethargy.

I had first heard about the Jatbula Trail five years ago when our family had enjoyed a canoeing trip on the Katherine River with Gecko Canoeing and Trekking: a small, locally based Tour Company.  Named after Peter Jatbula, a Jawoyn elder instrumental in securing land rights for his people, the track follows a route travelled by generations of Jawoyn between Katherine Gorge (30 kms east of Katherine) and Leliyn (Edith) Falls. Gecko had been guiding the then little known trail since 2001 and their descriptions of walking through wilderness and sleeping under the stars next to a different, isolated waterhole each night captured my imagination.

“You’ll have to come back” Gecko’s owner, Mick Jerram had said, “When the kids are older”.

Since then the trail has grown rapidly in popularity.  Answering demand, National Parks have increased the limit of daily permits issued from 10 to 15 and Gecko has been joined by World Expeditions and Australian Wilderness Adventures in offering guided tours.  In 2013, 1074 people walked the trail compared to an average of around 700 in the years previous to this.  I felt time was running out.  I was keen to experience the Jatbula Trail before it became too well known; too well trodden.

“They’ll be fine” said Mick, in his typical ‘nothings-a-problem’ fashion.  And, it appears, he was right.

I am not the only one relieved.  The other members of our group are Johan and Elizabeth: fit, strong, experienced walkers who, being recent empty nesters, had looked aghast when first introduced to their young walking companions.  They now join us at the rock pool and together we watch their boundless energy of the children who are apparently unfazed by the challenges of the morning.  “You forget how resilient kids can be,” Johan observes.

He was so right.  You do forget.  I had also forgotten how unfit I was.  I had been so concerned about how the children would cope; I hadn’t considered my own abilities.  By lunchtime today I was red-faced, my legs ached and I was feeling every gram of those 580g packets of lunch wraps I was carrying.

Although I talked it up however, I have to admit that the Jatbula Trail is not a difficult walk.  Traversing the Arnhem Land Plateau, the well-marked path is generally level with designated campgrounds and toilet facilities.  The furthest we would walk in one day would be 16kms and the longer days would be broken up by a refreshing lunchtime swim. 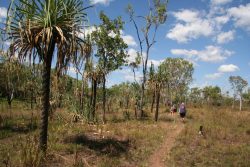 “I call the Jatbula Trail a destination walk” explains our guide, Matt Leigh. By this he means it is not so much about navigating a challenging scenic track but more about the end points: the ancient rock art amphitheater and the spectacular, crocodile free, waterfalls and swimming holes. We find this actually suits our group, allowing us to all walk at our own pace and have more time to enjoy the gorges in the afternoon.

Over the next five days we visit so many beautiful destinations, we are unable to agree on a favourite.  Christopher enjoys the bubbling spas of Biddlecombe, my husband is partial to the many layers of Crystal Falls, Elizabeth takes ownership of the pool she discovers chasing her sock over 17 Mile Falls and I like the peaceful reflections of Sandy Camp.

It would, in hindsight, be quite easy to walk the trail without a guide.  We are glad however to have the company of Matt, a laid back carnivore from Queensland, who has been leading tours in Nitmiluk and Kakadu National Parks since he joined the Gecko team three years ago.  Apart from setting a bad example by admitting he hasn’t eaten fruit or vegetables since age 4, when his mother gave up trying, Matt’s experience and knowledge of the local flora and fauna, of bush medicine and Aboriginal culture, greatly enhances the journey and appeases our guilt of taking the children out of school.

Despite his bad diet, Matt is fit and strong and burdens the bulk of the load. His enormous pack is heavy with emergency supplies and equipment which he carries tirelessly like a Nepalese Sherpa, allowing us to travel comparatively lightly.  The dependable clear skies of the dry season mean we need to take little in the way of clothes or shelter (we sleep under mosquito nets at night) and drinking water is abundant en-route. 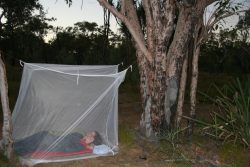 “Something to eat?  Something to cook with?  Something to sleep on?” was Matt’s check list before departure. His relaxed nature is contagious and we take on the challenge of getting back to basics and enjoy the freedom which comes with it.

Not that our boys find this a challenge.  They revel in the thought of not having to shower or change for five days.  Instead, they “wash and wear” under the waterfall and Matt shows us how to make soap from acacia 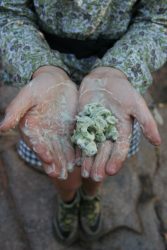 “Why aren’t you coming in?” calls 8 year old Claudia as she is swept past me, riding on a mini rapid.  I dive in to join them.  The water is cool and cleansing and I surface with a contented sigh.

Certainly there are plenty of impressive gorges and rock art galleries in more accessible sites of Northern Australia.  But like handmade gifts, we appreciate these all the more for the effort it has taken us to get there.  By the end of the five days we gain an affinity for this beautiful land and feel privileged that the Jawoyn people have shared it with us.

We have also gained a great sense of achievement and upon returning to Katherine pamper ourselves by booking into what is, for us, upmarket accommodation.  Despite being 38 degrees, the kids turn their noses up at the large, free form swimming pool.  “It’s chlorine,” they state dismissively, “And there are other people.”

I had worried the children might struggle with the walking, with the weight of their packs, the heat, the limited fresh food supplies and the discomfort of the primitive camping.  I had not anticipated them becoming spoilt.