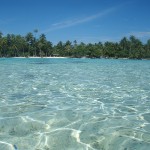 Feeling like Kate Winslet in Titanic, I balanced on the bow of our yacht, my salty hair swept back in the breeze, my sheer cotton shirt billowing behind. Dolphins raced us in the turquoise waters, so clear we could see the seabed. It was so romantic it was a cliché.

My 40th birthday present from my husband was two weeks sailing the islands of Tahiti in a charter yacht. But that wasn’t the best of it.
The present included a nanny to stay at home with our four young children. A bit of Indian giving on his part but very welcome all the same.

“I wish we’d win the lottery,” our eldest son had said. “Then we could all go to Tahiti.” I didn’t like to break it to him that he was kind of missing the point.
From the moment we stepped off the plane we felt like young movie stars, presented with frangipani leis and whisked off in a jet boat to our overwater bungalow. On our private yacht we moored in secluded bays, read, snorkeled and sipped champagne at sunset. I momentarily forgot I was a middle aged housewife and mother of four. I even wore a bikini.
With our heads in a cloud of idyllic romance, we didn’t bother to check the weather report when we ventured beyond the reef to explore islands further afield. Bikini clad, I soaked up the early morning sun on the deck as we cruised through the passage.

Immediately after leaving the protective confines of the reef, I moved back from the bow of the boat, already frightened by the size of the waves. We raised the sails and the boat keeled over sharply as a strong gust of wind seemed to come from nowhere. I clumsily clambered to stop our belongings from sliding overboard. The water turned a stormy grey, topped with white caps. We lost sight of our destination beyond the rising swell and belatedly remembered to put on life jackets.
At least it isn’t cold, I thought. But then the rain came.

We could see it sweeping across the water in dark, opaque sheets before hitting us with the force of a waterfall. I felt like we had sailed out of the eye of a cyclone. The rain was so heavy and the clouds so thick that there was no sign of land, either in front or behind us. I was constantly tense, clutching onto the rails of the boat, my knuckles blue and orange with the cold. I squinted against the driving rain at my husband at the helm. “This isn’t what I paid for!” he shouted indignantly.

My bladder was bursting but I couldn’t imagine how I could possibly sit steadily for long enough to relieve myself. Eventually I could bear it no longer and staggered downstairs. I opened the bathroom door and a wave of water rushed past me, carrying on its crest three rolls of toilet paper and the entire contents of my wash bag. As I stood knee deep, toothbrushes and shampoo swishing against my legs, I now had a new vision of me as Kate Winslet, this time going down with the Titanic.

My husband rushed to answer my panicked screams and discovered the shower window had been left open so that with every lurch to starboard, waves of seawater flooded in. He calmly closed the window, turned on the bilge pump and told me not to worry about “a bit of water”.

I stumbled back on deck and on coming up bashed my head on the cockpit hatch.

After many hours the wind dropped, the rain eased and our destination emerged out of the mist. It seemed no closer. We rocked around on the swell, making little progress. I turned around and noticed my husband was vomiting over the back of the boat. It was at this point I realised I would much rather be at home, unpacking the dishwasher.
Finally, as darkness descended, the flickering lights of the harbor came into view and we anxiously navigated the narrow channel in the reef. We anchored by torch light and, after a very large whiskey, rang home. We were given reports of an uneventful, mundane day of washing, grocery shopping and toddler tantrums. It sounded wonderful. 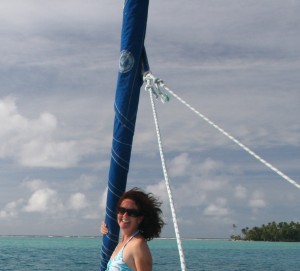 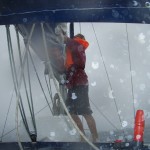